You are here: Home / Practical guides /How to report the science of COVID-19 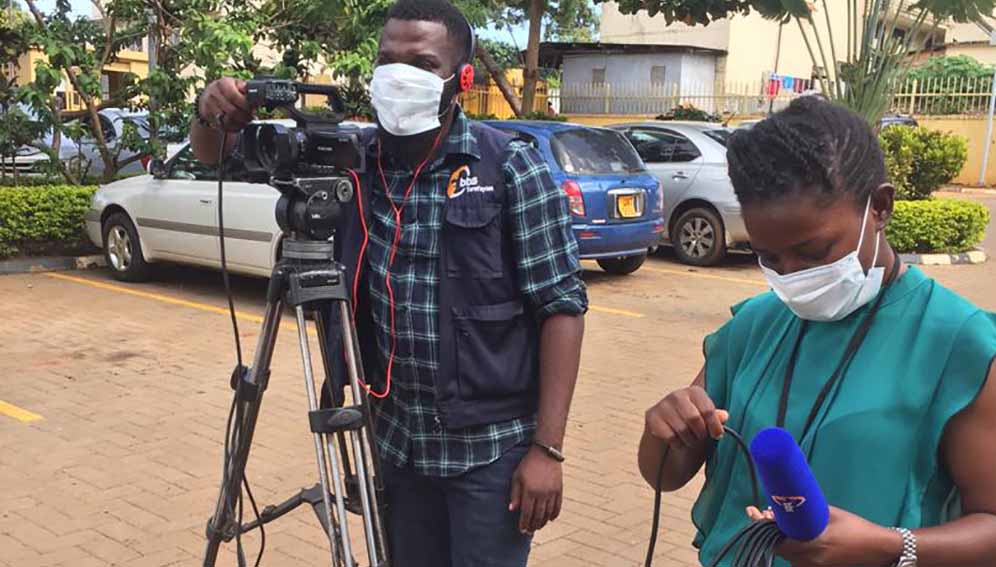 How to report the science of COVID-19

The emergence of COVID-19, known in full as coronavirus disease 2019, attracted a lot of research activity across continents. By the fourth month of the pandemic, the World Health Organization (WHO) had added more than 3,000 journal publications to its COVID-19 database. These include research papers and other scientific publications, such as case studies, narrative reviews and opinions. Various scientists are studying diverse topics such as the origin of the disease, the nature of the virus, how it spreads, who and how it kills, diagnostic tests, drug and vaccine research and the link between COVID-19 and other diseases.

From a media perspective, the multiplicity of research studies on COVID-19 offer an opportunity to report science stories around the pandemic. Whereas there are still more questions than answers about the pandemic, scientists are continually generating knowledge through research.

On the other hand, the speed with which scientists are carrying out research and releasing new knowledge on COVID-19 comes with increased risks of publishing false information. Research is supposed to follow a systematic process with safeguards at every step. When research is done in a hurry, there is a risk of collecting inaccurate information, making erroneous conclusions, and misleading the world with false recommendations. This requires journalists to be more scrutinous in reporting the science of COVID-19.

At the same time the internet and social media are overflowing with twisted, fabricated or half-baked information on COVID-19. It is, therefore, important to be able to differentiate between credible and false information.

This practical guide discusses how to report the science of an emerging pandemic such as COVID-19. Whereas nearly all examples used are on COVID-19, the principles discussed may be applicable to other emerging epidemics and pandemics.

Not every COVID-19 story is a science story

With the pandemic affecting every aspect of people’s lives, it is easy for a journalist to pay more attention to the social story than the science. Indeed, many stories focus on developments such as the number of new cases, deaths, socio-economic disruptions caused by COVID-19 and political controversies around the epidemic.

Scientists are continually carrying out research to answer certain questions, for example: do people who recover from COVID-19 become immune to the virus? They gather evidence and publish their findings in a peer-reviewed journal, after which it becomes acceptable as scientific knowledge. Basically, what we know today as science is a collection of knowledge produced through years of research by various scientists. This is why carrying out scientific research is also referred to as doing science.

A news report about people making and selling cloth masks for COVID-19 is not necessarily a science story. A story showing why and how the cloth mask may or may not stop transmission of the virus is a science story, whether it is based on a new study or established scientific knowledge.

Why it is important to focus on the science

Science provides the basis for informed decisions. How do we know whether doctors should start prescribing the malaria drug chloroquine for COVID-19 patients? It is only through research that scientists can establish whether a drug, new or old, is safe and effective in treating a disease. What about a lockdown policy? At what point should a lockdown be imposed, what’s the best way to do it, and at what point should it be lifted? Should individuals wear masks and gloves full time? What kind of masks should be permitted? These and many other questions that policymakers, professionals and individuals might have on their minds can only be answered meaningfully through scientific research. On the other hand, ignoring scientific evidence can be costly to society.

A good example is the widely publicised hypothesis that chloroquine might be useful in treating COVID-19. In March 2020, US President Donald Trump claimed that chloroquine had shown “very, very encouraging results” in COVID-19 treatment. Immediately after Trump’s pronouncement, the number of people using chloroquine increased dramatically. More doctors prescribed chloroquine for their patients and others used it for self-medication.

It is true that journalism is about people. This, however, is no justification to tell the social story and leave out the science. Every social story potentially has a science angle. It is certainly newsworthy, but not enough to report that chloroquine is selling out due to Trump’s remarks. A story would be more useful to society if it goes on to discuss whether there is any justification for widespread use of chloroquine. Take for instance the BBC story “Coronavirus and chloroquine: Is there evidence it works?” The author uses the rush for chloroquine as a news peg and then delves into the science.

Where to find COVID-19 science

As mentioned earlier, there is no shortage of COVID-19 science to report on. Below are a number of sites you may want to check regularly for new research, other scientific developments and ideas:

You may also get basic information and advice on COVID-19 from the following areas:

Key issues to pay attention to

Science is always advancing
At the time of writing this practical guide, the available scientific information is that there is neither a cure nor a vaccine for COVID-19, and we don’t know for sure whether taking chloroquine or remdesivir, a drug originally developed to treat Ebola, is effective in treating COVID-19 patients. The WHO has put together advice for the public based on the available scientific evidence. However, some of this can be modified when scientists come up with new evidence. It is normal practice in science to make adjustments when new evidence emerges and there is scientific consensus on it.

In March 2020, the internet was awash with claims that the TB vaccine, commonly known as BCG might protect human beings against COVID-19. These claims originated from three research papers showing that COVID-19 was less prevalent in countries that use the BCG vaccine. To conclude simply that BCG was responsible for the low prevalence of COVID-19 in some countries is like saying wearing sunglasses causes people to eat ice cream. There could be other factors such as demographics and the availability of testing facilities.

Indeed WHO issued a report clarifying that there is no evidence that the BCG vaccine protects people from COVID-19. “In the absence of evidence, WHO does not recommend BCG vaccination for the prevention of COVID-19,” says the report.

Peer review
Scientists announce their research findings by writing a paper and getting it published in a journal. A credible journal will always ask experienced scientists in the same field to scrutinise the paper before it is accepted for publication. This process, referred to as peer review, helps to check that the researcher followed the right procedures and made reasonable interpretations and conclusions about the study. In effect, this protects society from mistaken and fraudulent research findings and recommendations.

In this regard, the WHO report points out a fundamental flaw in the research papers that linked BCG vaccination to lower COVID-19 prevalence. The papers were posted online without going through the expected peer review.

These days, more and more research organisations release papers before peer review has been completed in the name of open science. It means that, as a journalist, you must be sure to check whether a paper has been peer reviewed before you rely on it for your reporting.

With regard to COVID-19, dissenting views are already emerging. For example, some scientists are doubting whether all reported deaths are actually due to COVID-19. Some argue that COVID-19 is no worse than seasonal flu. Dissident scientists have a right to their opinion, but that does not mean they are right. Most often they do not have strong evidence for their claim, which is why the majority scientists disagree with them, yet they can be very good at convincing journalists that they have a hot story. A consensus position changes only if scientists find clear evidence.

Often news organisations will fall for this in their attempts to write a balanced story. This is particularly evident in the case of climate reporting, where fringe views have been presented as being equally valid as the scientific consensus by journalists trying to balance their coverage. This is called false balance. A study by the University of California concluded that false balance threatened efforts to fight climate change by giving credibility to unproven claims by climate deniers.

Speed science
The speed with which research has been done and papers published on COVID-19 is unprecedented. It raises concerns that some scientists might be doing an unpolished job. Indeed, a Reuters analysis published in February 2020 indicates that, while some journal publications on COVID-19 are credible, many of them may be questionable or even plain wrong. Pharmacotherapy specialist Irving Steinberg raises similar concerns in his article, Coronavirus research done too fast is testing publishing safeguards, bad science is getting through. It is therefore important to check that the paper was published in a peer-reviewed section of a credible journal.

Absence of evidence is not evidence of absence
Some things are obvious to the human senses. If a teacher is in the classroom you will see and hear them. Some things are not as obvious as that. Take, for example, a microscope-based malaria test. The technician will not report that the patient has no malaria parasites. Instead, they will report that they have not seen malaria parasites in the sample. There is a slim chance that the malaria parasites exist but the test did not detect them. A similar principle applies to reporting research findings. On April 24, WHO reported that there was no evidence that recovered COVID-19 patients cannot be reinfected. This does not necessarily mean they can be reinfected. It simply means that at the time of making that statement they didn’t have any evidence.

Report in a simple language
It is always important to report the science in a language that can be understood by non-specialists. Avoid using medical jargon. You can always find everyday words or phrases to replace technical jargon. For example a CNN story used the phrase “remnants of the virus” instead of “RNA fragments”. Where you must use the technical terms, it is important to explain them. The International Journalists’ Network has put together definitions of medical terms that you are likely to encounter when reporting on COVID-19. It can help you in interpreting and simplifying the terms.

Fake COVID-19 news
The internet is awash with unverified and outright fake claims about COVID-19. A Reuters Institute report indicates that about 59 percent of the misinformation they sampled was misrepresentations of existing facts, while 38 percent was completely fabricated. Whereas only 20 percent of the misinformation came from politicians, celebrities, and other public figures, these accounted for 69 percent the social media engagement.

It is therefore important to fact-check any COVID-19 information you find on the internet or social media. Below are examples of resources you can use for fact checking:

In conclusion, the multiplicity of publications on COVID-19 provides a great opportunity for science reporting. However, the speed with which studies are done and papers published requires careful consideration in reporting them.

Charles Wendo, a science journalist and veterinary doctor, is the Training Coordinator for SciDev.Net